Good news for those planning Halloween parties, the U.S. Postal Service (USPS) will issue its first Halloween-themed postage stamps this year. Perfect for your invites! The set of four stamps will be available for purchase starting on September 29th 2016. 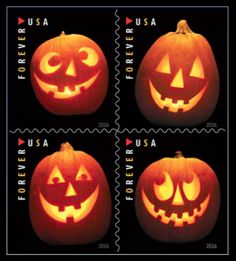 Jack-O’-Lanterns
In the spirit of Halloween, the Postal Service issues these delightfully eerie stamps featuring photographs of four different jack-o’-lanterns.  These creatively carved pumpkins have been symbols of Halloween in the United States since the late 19th century, not long after celebrations of the holiday began here. These are the first Halloween-themed stamps issued by the Postal Service. Paul Montanari designed and carved the pumpkins under the art direction of Derry Noyes of Washington, DC.  Sally Andersen-Bruce photographed the lit jack-o’-lanterns used on the stamps.

Anyone else excited for their release?