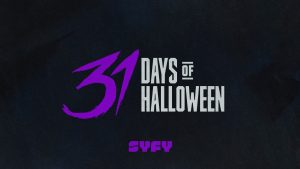 This October, SYFY is the destination for non-stop horror as the network celebrates its 10th annual 31 DAYS OF HALLOWEEN programming event. The chilling lineup airs all day and night throughout the month, and includes the premieres of five terrifying original movies, a new installment of the acclaimed anthology series CHANNEL ZERO, spooky new seasons of SYFY series VAN HELSING and Z NATION, a variety of cult horror flicks, and deep dives into all things horror on genre news destination SYFY WIRE.

Z NATION
Season 5 Premiere Friday, October 5th at 9/8c
An unlikely group of survivors become reluctant heroes in the zombie apocalypse when they find themselves on a mission to save humanity in this series starring Kellita Smith, Keith Allan, Russell Hodgkinson, DJ Qualls, Anastasia Baranova, Nat Zang and Lydia Hearst.

VAN HELSING
Season 3 Premiere Friday, October 5th at 10/9c
In Season 3, after being bitten by a shape-shifting Elder vampire loyal to the Van Helsing clan, Vanessa is once again resurrected and forced to confront her family’s legacy. At Crooked Falls, Axel, Scarlett and the others fend off Blak Tek’s forces who hope to add Scarlett to their list of lab rats. The series stars Kelly Overton, Jonathan Scarfe, Christopher Heyerdahl, Missy Peregrym, Vincent Gale, Rukiya Bernard, Trezzo Mahoro and Aleks Paunovic.

NO ESCAPE ROOM
Saturday, October 6th at 9/8c
A father and daughter check out a small town escape room and discover there is something sinister about the place. Starring Mark Ghanimé (“Reign”).

DEAD IN THE WATER
Saturday, October 27th at 9/8c
An all-female crew on a boat in the middle of nowhere must deal with an invader on their ship. Starring Nikohl Boosheri (“The Bold Type”).

Who else is ready for Halloween?