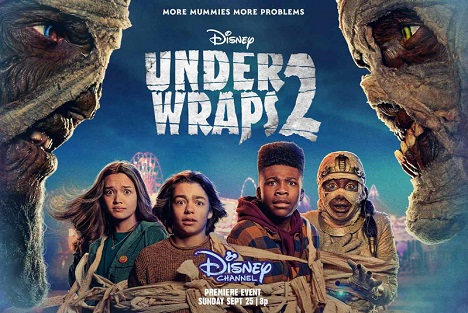 Disney Channel is getting spooky season started early with the premiere of its next original movie Under Wraps 2.

A sequel to 2021’s Under Wraps, which itself was a remake of the first-ever Disney Channel Original Movie from 1997, is set to premiere on Sunday, September 25th.

Set after the events of the first movie, Under Wraps 2 picks up as:

“Marshall, Gilbert and Amy are getting ready to attend Amy’s father’s Spooktacular Halloween-themed wedding to his fiancé Carl,” according to the synopsis. “However, plans soon go awry when the three friends discover that their mummy pal Harold and his beloved Rose may be in danger. Sobek, an evil mummy with a thousand-year-old grudge against his best friend-turned bitter rival Harold, is unexpectedly awakened and out for revenge. With help from his hypnotized lacky Larry, Sobek kidnaps Rose, and Amy, Gilbert, Marshall, Buzzy, and Harold must use their skills once again to save her and get back in time to attend the wedding.”

“We are thrilled to kick off the Halloween season by taking the fans on another spooky adventure with even more mummies, more scares and more fun,” said Lauren Kisilevsky, SVP of Original Movies, Disney Branded Television