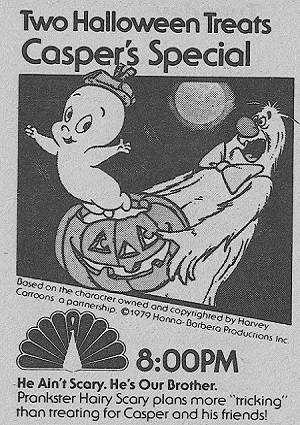 On Halloween night, Hairy Scarey, Winifred Witch and Screech Ghost are plotting their mean-spirited spookings. Casper refuses to join them and decides to go trick-or-treating dressed as a real boy, but neighborhood kids see through his disguise and run away in fear. Casper is heartbroken until he meets a special group of orphans who accept him for who he is, a ghost. But their fun is soon spoiled as Hairy Scarey and his ghostly crew interfere. Now it is up to Casper and his new friends to stop their ghastly games and save Halloween before it is too late. The TV special premiered on NBC on October 30, 1979.