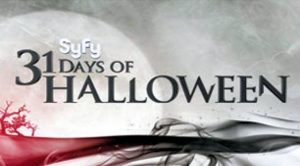 Syfy Channel’s 7th annual “31 Days of Halloween” will return on Wednesday, October 1st 2014 at 8:00pm and will run through Friday, October 31st!

This years “31 Days of Halloween” will unleash nearly 600 hours of bloodcurdling programming featuring the 10th anniversary Ghost Hunters special, the Original Movies Dark Haul and Finders Keepers, and a wide array of spine-tingling theatricals including Texas Chainsaw Massacre (2003 remake) and The Reaping.

Check back soon for the full schedule.