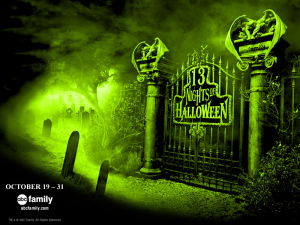 ABC Family scares up the 2013 13 Night of Halloween celebration, with programming filled with scares and frights as you countdown to Halloween! The popular programming event, now in its 15th year, starting Saturday, October 19th, and concludes on Thursday, October 31st, features a brand new episode of “Pretty Little Liars” and the highly anticipated premiere of spinoff series “Ravenswood.” The stunt will also include the ABC Family feature film premiere of “Men in Black,” the network premiere of “Disney·Pixar’s Toy Story OF TERROR!,” and a ghoulish mix of Halloween-themed programming airing for the 13 nights leading up to Halloween.

Here is the full schedule (all times shown in Eastern):