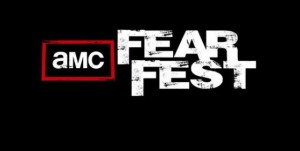 Mark your calenders! AMC has announced that FearFest will start on Sunday, October 18th 2015!

So get ready for “Zombie Apocalypse Week” from October 5th-11th, “The Walking Dead” season six  premiere October 11th and then “FearFest” from October 18th-31st.

I don’t know about anyone else, but we are ready for October… NOW.